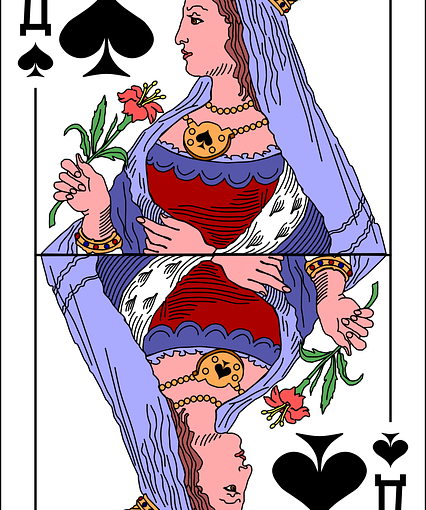 “You can just stop this right now. I’m not listening and furthermore,”

Queenie jumped right back in, “Humph, indeed! And furthermore,” she continued “I will not be allowing you to spread your gloom and doom in this space or any other space, for that matter.”

“And you can stop your eye rolling, laddie, right here and now because you are most decidedly crossing the line here, what with your blatant disregard for your elders and your shooting down all the dreams and imaginings of the young lads and lassies hereabouts. ”

Mr. Mann raised his eyebrows and looked down his nose.

Queenie shifted slightly in the gilded wingback chair. The chair was setting upon a Persian rug that covered the raised platform at the end of the great long room.  Queenie smoothed her skirt so that the gold threads shimmered in the weave of the red silk. She tucked a loose strand of her silver hair behind her ear and reached for the porcelain cup of lemongrass tea on the table beside her.  She raised the cup to her lips and took a sip.

Mr. Mann watched her during this lengthy process. The moment she placed the cup and saucer back on the table, a footman appeared and neatly picked it up. He acted so quickly, Mr. Mann wasn’t quite sure that anyone had actually been there at all.  But the evidence was there–the cup which was there one moment–and gone the next.

Queenie cleared her throat. “So I see you are somewhat amazed at what just happened here, aren’t you?” she raised her eyebrows in a question.

Mr. Mann looked at Queenie and then glanced around the room.

“Ah, so that’s the point I’ve been trying to make to you this afternoon. But, just as I thought, you’d have to see it, with your own dark eyes, to believe it. And if you don’t actually believe it, you will, I daresay, wonder and perhaps even doubt the tall tales of horror that you are spreading.”

Mr. Mann’s eyes widened with interest and then his face darkened.

“Ah, do I detect a wee shadow of a doubt upon your own face, Mr. Mann?” Queenie observed.

She nodded her head ever so slightly and the footman appeared with a plate holding two ginger biscuits which he place upon the table and just as quickly disappeared.

Mr. Mann once again glanced about the room, perplexed. He adjusted his glasses upon his nose. He stared at the plate on the table. “How the devil did it get there?” he thought. “Was there or was there not a footman here and then gone, in a flash of light?”

“I like to take my biscuits separate from my tea, you see,” Queenie remarked as she picked up a biscuit from the plate and took a small bite. “I would offer you one but as I know you are against all manner of enjoyments and comfort, I won’t be wasting my time with niceties.”

Mr. Mann stiffened and folded his arms across his chest.

“Well there you go again, getting all defensive are you?. But I can’t much blame you because in your heart of hearts you know what I’m about to say is true.”

“Let’s get at the center of the matter, shall we?” Queenie nodded as she spoke, the footman appeared, scooped up the plate and the remaining cookie and in an instant was gone.

At this Mr. Mann, exploded. “What sort of trickery are you employing here madam?” and he strode about the room, searching in every corner, moving chairs, looking behind tapestries and under the vases of flowers, on ledges and behind books on the shelves–grumbling under his breath. “Smoke and mirrors.”

Queenie brushed a crumb from her lap and watched patiently until Mr. Mann completed the circuit of the room, exhausted.

“Mr. Mann, calm yourself. Now, let us bargain, shall we?” Queenie smiled.

“Ha,” Mr Mann frowned and clenched his fists at his side.

“It will do no good to resist. You shall listen and learn. Shall we agree that if you find what I say to be  true and indisputable, you will leave these parts and take your sad countenance away, along with your horrors?”

Mr. Mann unclenched his fist and relaxed–for he knew that as the day is long, he was not only resolved in his opinions and ideas but unshakable. Had he not reasoned and persuaded the masses with as little effort as casting a thought upon the air? He nodded his assent.

“We are agreed, then. So be it,” Queenie smiled.

“You see according to the quantum physics, that was discovered in the last century, things can be in two places at once. However there is just this one place that we are in, right now, in this moment. And that is what we must deal with. For the parallel universes, if they exist, must carry on without us, dealing with their own problems in their space and time”

“You yourself feed upon the imaginings of what might be, do you not? Alternatives, as it were, a myriad of possibilities for any given event or non event.

“Right. Let us take a wee example, shall we?” Queenie lifted her head in thought.

“Ah, let’s consider an ant. The ant appears here in the hall. A common thing to be sure. But then another and another. Mr. Mann, you see an opportunity, for you know the season for ants is upon us and the males are seeking mates, a frenzy time indeed. And you also know that the males have wings, do they not, to allow them to fly about in their search for a female and to build a new colony?”

At this Mr. Mann closed his eyes in boredom.

“Yes, it is a simple tale but useful. Bear with me for here is the point, I’m coming to. You have met the landlord of the hall, have you not?”

“Aye, for sure. Was it not you that suggested to him that the wee ants amassing was a swarm of termites? Did you not submit that the male, winged ants, looking for a bit of love, were in fact termites?”

“Ah, the smile upon your face, Mr. Mann betrays you. Are you remembering suggesting the possibilities, massive they were: the colony of termites, potentially many colonies–hoards of colonies beneath the structure who had been gnawing away on the beams and footings, walls and ceilings–for years, even though the wee insects had only but arrived? The poor man, with the horrors you painted, completely forgot that the hall is made from stone. He went about for days, feeling defeated, imagining his doom, all that he’d worked for, gone–his family destitute, on the street, beggars.

“Well there you have it.” Queenie smiled. “You yourself subscribe to and exploit quantum theory.”

“I beg to differ, Mr. Mann. It is of great consequence. For indeed there are innumerable possibilities in the imagination for the future. But in the here and now of the present,  you cannot have all the possibilities that the quantum physics prescribes–the infinite number of being here and being there, acting differently. In this place, in which we live, there is only the one alternative, the present. And in the present there are only ants, easily managed. So you can take your horrors and imaginings away. And let these good people cease their worrying and doubting and instead bring to life the imaginings they choose to make real–not the horrors you purport.

Mr. Mann’s eyes widened. His face reddened and his heart pounded. The hair on his head and the back of his neck rose and bristled. His fist clenched. In quick strides he advanced upon Queenie. As he uncurled his hands and raised his arms, he was gone. He was there and in the same instant gone.