Two windows, two doors, two closets–made for two but there is only me.  I lie in the queen-size bed–alone–alternately rolling from one side to the other, seeking out the cool. My bones complain to me at each movement–age.  In the dark I can hear a soft roar.  Sometimes I imagine it to be ocean waves but it is the sound of tires on pavement, a steady stream of cars and trucks crossing the bridges–two bridges–that curved around the peninsula.

Wind chimes tinkle softly just outside the door that leads to the patio.   The door is locked.  The blinds closed.  The dead of night, the clock ticks–the small hand past two, the long hand on six.  The clock is fluorescent and shines in the moonlight that passes through the crevices of the blinds and drapes.  Too early to rise.   Dawn will come soon enough and the long day that stretches before it–in the room.

Out of nowhere a thought, a memory explodes around me.  The corsages lay on the table for us, his daughters to wear upon their coats for Christmas–long ago.  How can you describe a memory,  rich with the sense of innocence and safety?  Innocence in that my world was small, safe because–well–because.  The sensation of it falls upon me and just as quickly lifts away–in the room.

Morning, the sounds of the house–my house– that stretches beyond the room–sounds of flushing, running water, the smell of coffee wafts into the room.   My eyes open.   I must rest here until they come for me and help me out of–the room–the burden that I am. 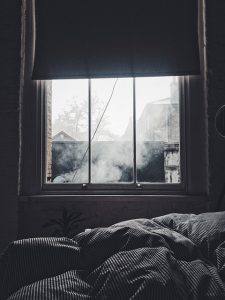