It was a test.  They knew it.  Four young people: one 28, one 27, one 26 and one 25 years old–male, female alternately.   Two were musicians, two were not–all educated.   No one told them it was a test.  They instinctively and immediately realized this when they filed into the room and saw the four chairs–spaced exactly 24 inches apart–in a row.  Each chair was different, like out of a museum.  Perhaps they were museum pieces. 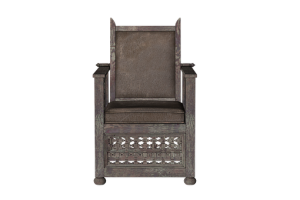 The 26 year old thoughtfully looked from chair to chair and then from face to face.  After a few moments he moved in front of the high back wooden chair positioned directly beneath one of three stained glass windows.  He  bent over and examined the chair.  After a moment, he straightened and glanced to his right.  The 28 year old had quietly moved to his side.  She was absorbed, examining the short wooden chair with arms.  A horizontal, dark stained glass window through which no light could pass was behind and above it.

She felt his eyes upon her and looked his way.   Her nod was almost as imperceptible as his.  Together they left the room, she leading , he silently following.

The 27 year old shrugged her shoulders as she watched them leave.

“Shall we?”  She held our her hands to the chairs.

He shook his head.   Then smiled with his eyes.   In two strides he was upon the chairs, moved two in front of the others.

She sat.   He sat. They removed their music from their bags and placed it on the chair backs.  He played flute, she percussion.