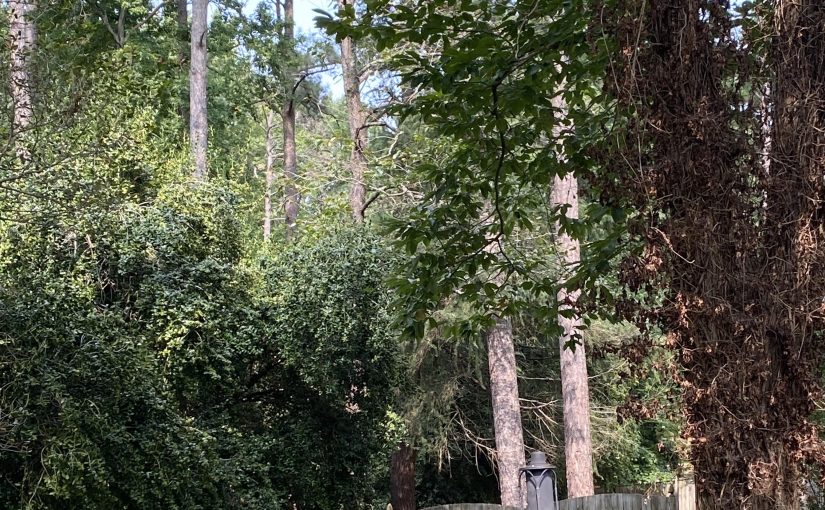 I’m in the piedmont but it feels like the mountains today. On the wooden fence, the honeysuckle is blooming still, ready for a deer tall enough to reach it and eat it for a snack. They will be by later–the deer–sometimes a herd of six or seven, sometimes just three–a doe and her two fawns. The fawns are losing their spots now and the doe’s coat is growing darker. Mid-September, the perfect time of the year here in Virginia.

June and Waylin, the hound dogs are out. They are city dogs and have been kept inside all summer, on a leash for walks in the suburbs. A copperhead almost bit Waylin, in their backyard, up close and personal. Maybe the snakes are gone now and the hounds are allowed outside. The snake man was coming to treat the yard–whatever that means. It’s a jungle back there–a woodland tangle of growth–tall pines, a few hardwoods and lots of scrub brush. On my side of the fence, someone has clear out things but it wants to come back, ivy winding itself up the oat trees, Virginia Creeper smothering the shrubs.

The dogs are barking now. Mountain hound dogs wouldn’t be making such a racket. If Waylin and June were mountain dogs, they’d be a little less frisky. They would be lazying around, napping under the porch, until the hunt is on–that is and then Katie bar the door. Mountain dogs would grab the snake and shake it good. I’ve seen two of hounds, one on each end, stretching a snake between them–in the country.

But I’m in the Piedmont, in the suburbs of the city, old suburbs–almost forgotten, with creeks and lakes feeding into the river–sections of land that can’t be developed any further, perfect for the deer, rabbits, and squirrels. Here, garages are not attached, kitchens have not been updated with their shiny, stainless steel appliances and granite countertops. Bathrooms are small and closets hold a reasonable number of clothes. Perfect, or perfect enough if you can’t live in the mountains. Here I pretend on a cool September day, with the warm sun on my shoulders and the quiet of the outdoors, pretend that I’m up on the Blue Ridge.